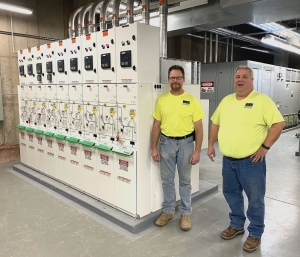 MetroHealth Parma Medical Center was originally constructed by Kaiser Permanente in 1966, and underwent eight significant building additions dating from 1969 to 1995.

As the building grew, the 13.2kV distribution system was modified to accommodate its expanding electrical loads. Over time, the safety and integrity of the system became a growing concern and MetroHealth decided to proactively replace the main switchgear and associated 15kV cabling.

Space for the new 15kV switchgear within the main electrical room is a challenge, so a European-style Premset switchgear by Schneider Electric is being used.

All 15kV cables at the facility are being replaced using General Cable copper wire (EPR insulation with a rugged CPE outer jacket) and Prysmian separable connectors.

Harrington electricians Richard Drumm and Dave Ross are leading our efforts through this complex, phased project. Richard has a mastery of switchgear assembly and rigid conduit and large cable replacement, while Dave focused on the 15kV terminations, splices, and switching operations.

Changing of the Guard at IBEW Local 38